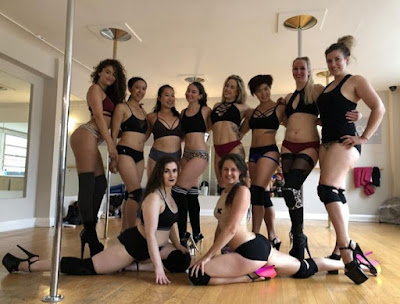 “Jazzy K is a pole dance instructor and performer based in Zurich, Switzerland. She is a regular teacher at Gravity Arts Dance Centre.
As teaching is her passion, it's an honour for her to also work for the pole instructor education program XPERT Pole & Aerial Fitness, teaching worldwide.
Next to giving her passion to others, Jazzy also enjoys performing a lot, and just earlier this year she won 2nd place at the Felix Cane Pole Championship (2018).”

I met Jazzy last year through Iris Pole Dance Studio and saw her performing at Pole Theatre UK, her style is badass, sexy and with a pinch of rock n roll, I was just amazed! Early this year she announced she would be back in London and teaching some of her new workshops at Pole People, I couldn’t help to feel excited about it and I obviously booked my space!

Arrived the day and I was ready to learn some new sexy moves. We started with a quick warm up and worked on our leg waves, moving on onto the actual routine, as we were (what seemed) far too many for the amount poles available in the studio, we were divided in two groups for the workshop, Jazzy being the experienced trainer she is, she managed this very well and we all got fair equal amount of time in the pole as well as time with her, to individually see us and assist us with required point. However I must say, should this have been the case last year (not having enough poles for everyone) I would have struggled a bit, just for the simple fact that I take a lot longer than most people to finally get into the routine, but this was more down to the studio itself and the way they managed the workshop, I would suggest that for future workshops of this size they take the bigger studio and limit spaces, PD workshops do not come in cheap for most people in London, so I personally think it is only fair to have individual workshops, however once more; it is important for me to stress the fact that this is not related to Jazzy herself, if anything I can only give her more credit for the way managed the time with all of us.

After the warm up Jazzy had us listen the song (and right there she had me, we would be dancing to “Killing strangers” by Marilyn Manson whom I just love and find his songs exceptionally beautiful paired with pole dance),  she explained the beats to which we would start the (which was of a really good help to me personally as I am not too good at counting the steps and figuring out when is the right time to do what). She then broke the routine into several steps, she would show each one of them at its time, we would do it together with her (about two reps for each part), she carefully examined how we were doing it, and answered any questions we had, to then proceed to the next part and so on until the routine was all put together and it was time to dance the entire routine.
I truly enjoyed the routine and was able to see a lot of improvement in my moves compared to last year’s workshop, although two completely different routines, last year’s routine had been hard for me to follow, not because it particularly hard, but because I was still quite new into the actual exotic dance part of poling, last year I was so worried about following every single step that my fellow polerinas, that I ended up not truly enjoying it for myself, whereas this time, my perception was better and I was able to move through the music and enjoy myself as I was going. 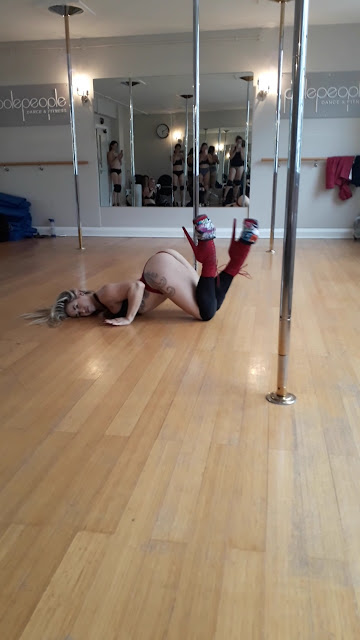 Came the end of the session and we were honoured to see Jazzy dance for us, I can never tire of seeing her move around the pole, she is so graceful and sexy at the same time, and quite unique in her own style.

I think by now you have already guessed that I absolutely loved this workshop and came out feeling so much more confident of my poling skills, so I must say THANK YOU Jazzy for being such an inspiring woman and teaching us so many beautiful moves, I look forward to attending more of your incredible workshops.


Also, I hear Jazzy will be back to the UK in November 2018 for Pole Weekender, and I am really hoping I can go and go to another workshop with her, she always brings something new and empowering for her students, so why not take the weekend, you could visit Sheffield a beautiful and rich in culture city and at the same time, dance with one of the biggest pole dancers.